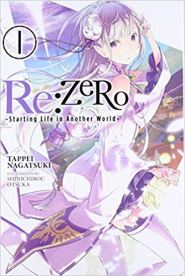 But when he is saved by a mysterious, silver-haired girl with a fairy cat, Subaru attempts to return the favor by helping her track down something that was stolen from her. When they finally manage to get a clue, Subaru and the girl are attacked and killed by someone.

Subaru then awakens in the place he was summoned and notices he gained the ability “Returns by Death” and has become a helpless boy that only has the ability to rewind time to a certain point by dying.

Beyond the despair, can he save the girl from the fate of death?

At first glance, it looks the same as any other isekai novel — an ordinary Japanese highschool boy suddenly finding himself transported to a fantasy world filled with magic. However, what immediately sets this novel apart is how quickly the mood of the story changes. From an initially easygoing, happy-go-lucky atmosphere, the tone of the story becomes really dark, as the MC finds himself murdered together with the mysterious girl he just met. This novel’s strange mix of comedy and tragedy is quite grapping, as it instills a sense of horror in the reader, that the cheerful girl who was just introduced moments ago has just been brutally murdered.

This really helps connect the readers with the sole desire of the MC, Subaru, who just wants to protect that girl’s smile. Unfortunately, in his desire to do so, Subaru finds himself dragged into a game of intrigue and soon realizes that his only way out is through his unique power — Return by Death. But with every death he encounters, the trauma of dying returns with him, slowly chipping away at his sanity every time he uses his power. This really makes the novel quite an emotional roller coaster to go through, as there are numerous ups and downs over the course of this story. There is also a sense of deep gratification whenever the MC is able to overcome these hurdles, as he is quite frankly ridiculously weak compared to the superhumans who inhabit the fantasy world.

The plot reveals at the end of each arc are quite excellent, and they tie in to complete an expansive lore and extensive worldbuilding in the story. I would definitely recommend this story for people who want to read a unique isekai novel.

*Sidenote: translation starts after the end of episode 25 of the anime.

View all posts by Justin Y