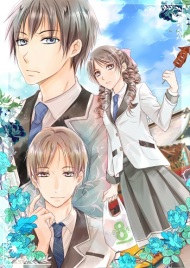 It was something that happened while I was waiting for the day of the primary school entrance exam. I realised that I had become one of the characters of a shoujo manga that I loved reading in my old life, ‘you are my dolce’.

The role I was assigned was a character who bullied the commoner protagonist and tried to get in the way of her love with a rich boy nicknamed Emperor; a typical villainess rich girl, Kisshouin Reika.

At the end of the story, Reika suffered the Emperor’s retribution and even her family fell into ruin. With the villain gone, the protagonist and the Emperor overcame their trials and became a couple. And they lived happily ever after.

Wait, that’s terrible for meee! The manga ended there, but I have to continue living my life after my family is ruined!

The protagonist can enjoy her romance or love or whatever on her own. I’ll erase my presence so that I don’t anger the Emperor.

Eh? The story isn’t progressing well because there’s no villain, you say? But I’m busy saving up money and studying so that I can live well after the collapse.

This is a very lighthearded story about a girl reincarnating as an ojou-sama in a popular otome game. The otome game trope has recently become quite popular in Japan. One way that this novel stands out is how slow the romance is and how early the story begins. The story starts when the MC is still a grade schooler, and gradually progresses until she becomes a high schooler. The story is basically food porn at times, as the novel goes more into detail about the various food that the MC eats rather than going into depth about the romantic interests. The misunderstandings happening in the novel are also quite hilarious, as the side characters have a completely wrong understanding of the MC, with only the MC’s close friends realizing how deeply strange she truly is and how far removed she is from her public persona.

View all posts by Justin Y